It’s a new year.
A new face for the blog.
A new Pagan Blog Project.
And, a new chance to get back on the blogging horse.

I’ll admit, I lost steam last year; the main blog here on WordPress and the Tumblr blog both started to fizzle, content-wise. But, I am determined to catch up this year!

To keep myself from burning out like I did last time I tried to complete the PBP, I will probably only be posting every other week. I may post more than that, or in between, but I am holding myself to writing something every two weeks.

As this is about A New Start, I’d like to announce the beginning of a new project for me,: 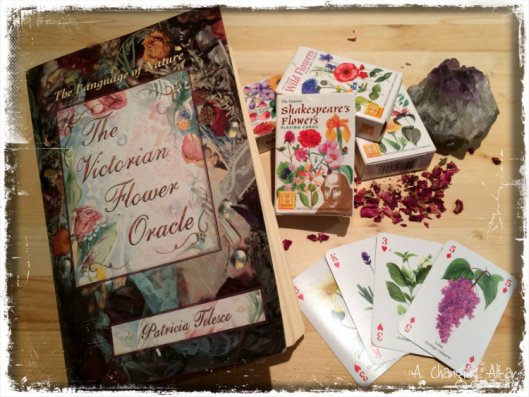 My very own flower oracle deck!
Some of you may remember my entry for the letter F last PBP, where I talked about The Victorian Flower Oracle. Well, since then I have been fussing around trying to find a way to create my own divination deck, and thanks to an incredibly thoughtful gift from my fiancé I now have what I need!

After some searching online I was able to find Heritage Card Company, a company that creates a huge selection of playing cards based around themes like flowers, modes of transportation, historical people/events, science, dinosaurs, or beach themes. I purchased the Wild Flower, Garden Flower, and Herbs decks to mix and match and make my own divination set. Each card has a beautifully rendered drawing of a flower, a common name, and its Latin name. 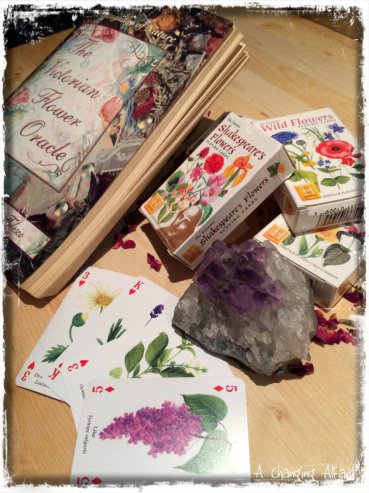 I’ll be using the Telesco Victorian Flower Oracle as a starting point, but I will also be referencing books such as The Flower Speaks, Pharmako/Poeia, and a few others I have on hand, such as herbal almanacs and Cunningham’s. The idea being that I will build up my own symbolism based around Victorian flower language, magical attributes, and medicinal uses. These meanings may end up being heavily personal in the sense that they are associations I have built over my lifetime, but it is supposed to be a personal deck, so I’m excited for that aspect.

I was also given a 4th deck that I intend to keep intact as it is. That is the Shakespeare’s Flowers deck; it is similar to the other decks in every way except that it also includes a small quote from a Shakespeare play or sonnet related to each flower. I found this one really interesting because I can use it in 3 different ways; as a flower oracle, as bibliomancy, and as a playing card divination deck!

It will take me some time to get the system sorted out and written down, but I am thrilled about my new project!

That said, I may try to include a flower in all of the upcoming PBP posts, sometimes alongside whatever other topic I am writing about.

I realize that my subject this week
is a bit of a cop-out, but, well,
I had to get this show on the road
somehow!
Please, forgive me!

I hadn’t realised that I’d only posted this on my Tumblr account, and never here. So, while it is a …

As the wheels rolled down the pavement, I was treated to a lazy ride with two fellow witches, from home …

All things considered, this devotional act could be considered one of the more superficial ones. An act that required little …

Since my How-To’s on broom-making and cascarilla were pretty popular, I’d try a video this time describing how I made my ritual scourge. I …

I decided to make a couple of playlists for magical use. I decided to use Grooveshark as you can find …

A Brew to Ease an Emotional Crisis – This brew is incredibly basic, and can be adapted to any situation by switching …

I was nominated for a Liebster Award by Pixiecraft! It was beautifully timed, because I felt like I really needed …

Follow me on Tumblr for reblogging, quick updates, and lots of photos!
TUMBLR: A Changing Altar